{TWD} The Tale of the Ice Cream Tart

As a member of the Tuesdays With Dorie baking group for nearly three years, I've made every recipe that's been chosen since I joined the group, and I intend to bake all of the remaining recipes. (The jury's still out as to whether I'll go back and make all of the 25-or-so recipes that the group completed before my time.) So, since I know that each of the recipes will get chosen sooner or later, I usually wait and make recipes from Dorie Greenspan's book when they are selected for the group.
Every now and then, however, I find a recipe just too irresistible, and I make it before its turn rolls around. Then I save my notes until the recipe's turn in the spotlight and post my version along with the rest of the TWD group. Such was the case with this week's recipe, the Coffee Ice Cream Tart.
If ever a recipe had my name all over it, this was the one. I absolutely adore coffee ice cream, especially when accented with almond and chocolate, and the tart section is my favorite part of the book. It sounded delicious! I tried to patiently wait for the recipe to be chosen for TWD, but in December when we made plans to eat Christmas dinner with my husband's brother's family, I knew what I'd be making for dessert. Everyone in my brother-in-law's family are huge ice cream fans, and coffee ice cream is their favorite flavor too. I figured that this tart would be a great way to "dress up" coffee ice cream to bring to their house for Christmas.
n.o.e.'s notes:
- Jessica of Domestic Deep Thought of the Day chose the tart this week; if you'd like the recipe, check out her ice cream tart post.
- For this tart, I made the coffee ice cream from Baked Explorations cookbook. I've tried a bunch of other coffee ice creams; and have liked them all. This recipe made a very nice ice cream, and was quite easy. But don't eat it in the evening if you are planning to go to sleep anytime soon! Usually I use a decaf option - decaf instant coffee or decaf beans, depending on the recipe - in coffee ice cream, but the recipe here called for espresso powder, so it definitely introduced a hit of caffeine. I've included the coffee ice cream recipe, below.
- The tart has an almond-based crust, then a layer of chocolate, then a filling made of ice cream combined with almond paste and almond extract.
- Even though I got the almond paste pretty darned smooth, it seemed like it gave a slightly gritty texture to the ice cream when I mixed the ingredients together for the tart filling.
- I topped the tart with sprinkled toffee bits and chocolate chips.
- We spent Christmas day visiting relatives and going to church. By the time the tart was finished, there was neither time nor daylight for me to take a picture of the tart. Time for plan "B": make sure there's one slice of tart left over so that I could photograph it the next day.
- As a result of its longer stint in the freezer, the crust got very hard, but the ice cream never quite got a chance to freeze completely and set up, so the tart didn't serve very neatly.
the verdict:

I can't say that this tart lived up to the anticipatory hype. The ice cream was a bit grainy with the almonds in there, and the crust was frozen way too hard. Each element was fine but I didn't love them together.
the rest of the story:
At this point you might be wondering why you haven't seen a picture of this dessert. Here's the rest of the tale:
We all enjoyed about 3/4 of the tart for dessert. It was below freezing - in fact we were enjoying a White Christmas - so with space in the freezer being a bit tight, after dinner I put the leftover tart on the table on the porch to keep cold. When it was time to head home I went outside to get the tart, and this is the sight that greeted me: 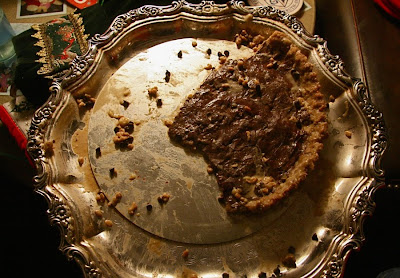 Buddy their dog had helped himself to a Christmas treat: he'd licked off all of the ice cream, leaving the chocolate-lined crust behind on the serving plate. And this is the only pictorial evidence I have of the coffee ice cream tart!
It wouldn't be very nice to leave you on that ugly note, so this week I made a mini ice cream tart, with a chocolate crust I happened to have in the freezer, and the Double Vanilla Bourbon ice cream I made over the weekend (which I posted here) It was an early birthday treat for my daughter JDE, whose birthday is in two days (but she won't be home. We've also celebrated with some delicious pots de creme, her favorite dessert.) the recipe:
Coffee Ice Cream
adapted slightly from Baked Explorations, by Matt Lewis and Renato Poliafito
Ingredients
6 egg yolks (90 - 120 g total yolks)
1 3/4 c heavy cream
2 c whole milk
3/4 c sugar plus 2 T
1 tsp salt
3 T instant espresso powder (not the same as coffee grounds)
1 T Kahlua
1. Put the egg yolks in a large heatproof bowl and set aside.
2. In a medium saucepan, stir together the heavy cream, milk, sugar, salt, and instant espresso powder. Bring the mixture to a slow, consistent simmer and remove from heat.
3. Whisk the egg yolks until just combined, then slowly stream in the hot coffee cream mixture while whisking constantly. Transfer the mixture back to the saucepan. Heat over medium-low heat, stirring constantly, until the mixture is thick enough to coat the back of a spoon (about 175 degrees)
4. Remove from heat and strain the mixture through a fine-mesh sieve into a bowl set inside an ice bath. Whisk in the Kahlua, and let mixture cool to room temperature.
5. Press a piece of plastic wrap directly onto the surface of the mixture and chill in the refrigerator for at least 4 hours.
6. Freeze in an ice cream machine, following manufacturer's directions.
Posted by Nancy/n.o.e at 11:13 PM

That's a hilarious picture of the dog-eaten tart! I'm glad someone enjoyed it! Thanks for baking with me!

I'm so impressed that you made your own ice cream. I've also been a TWD member for several years and I think I've maybe missed 5 recipes (including this week's) and I do hope to go back and make them. I'd love to be able to say I've made every recipe from a cookbook!

the dog truly did eat the crumbs here! you know, i guess i didn't read the ice cream part of the recipe carefully, because i stirred sliced almonds into my ice cream...totally didn't realize they were supposed to have been made into paste until i read your post. oops!